So, Greg heads back to work this week. Before his first day, though, he was taking a snowboarding trip with a bunch of his friends. Last week he mentioned that he was thinking of getting a hat like he’d seen one of his buddies with – a knit black cap with a brim.

“You could make it look good?” he asked.

“You could make it by Monday?” he asked.

Having knit myself into a corner, so to speak,Â  I accepted the challenge. We looked at hats online to establish what, exactly, he was looking for.

“You want ribbing? Cables? Or just plain knitting?” I asked.

“Okay, then. Yeah, I don’t have any black yarn that would work for that. Last time I checked, they don’t at the Arts and Crafts Store, either. But the girl who works there told me how to get to the yarn store in the next town over…”

(That’s actually why we took the trip that resulted in the photos for the ‘Driving in Japan’ series. We found the yarn store…eventually…and it was nice. It was more of a craft store, to be honest, but they had wool – which can’t be bought at the craft store on base for love or money – and they had black. Next time I go back I’ll take pictures inside the store, because it’s definitely worth a blog post all it’s own.)

So if you think you’re going to find Lion Brand or Patons or Cascade out on the town in rural Japan, you are apparently in for a shock. After careful consideration, I emerged with (among other things) this: 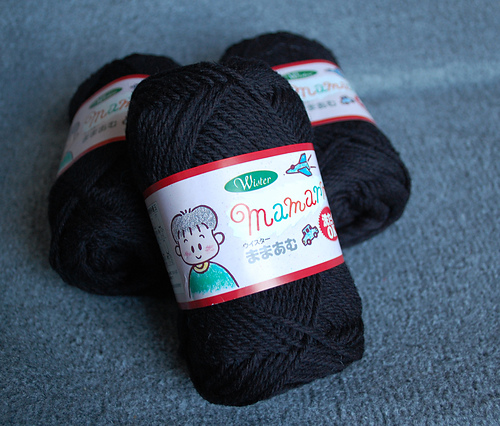 Three balls of Wister Mama-amu, a very nice 60/40 Wool/Acrylic blend in what appears to be DK (or possibly Sport, my WPI-detecting skills are a bit weak) weight. So, with three days to snowboarding, it was game on. There’s not much to tell about the knitting (except for the fact that I knit it on size 3s that were a bit too shortÂ  for the project…), but by late, late Sunday night I had created this: 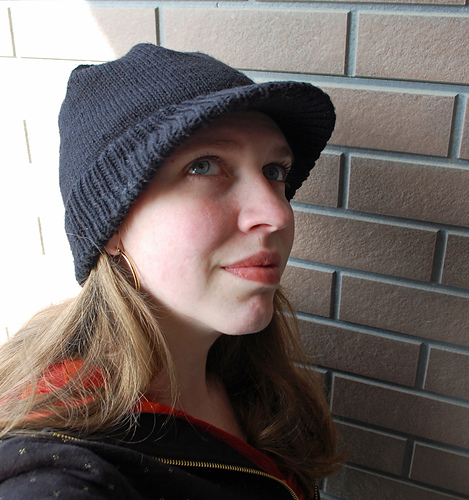 and I love it. I made the brim with plastic canvas wrapped in duct tape, and it is the most excellent brim I have ever made. Seriously. Try it the next time you need to make one. You won’t regret it. I told Greg that if he decides he’s not going to wear this for whatever reason, he shouldn’t expect it to sit around for him. Even though the 1 x 1 ribbing was death on my hands, I might make one for myself just because it’s SUCH an awesome hat.

Expect to see this again.