Today is the day that, after weeks (even months) of waiting, the snow that has been flirting with us decided to come down the way it’s supposed to. Aaaaahhhhhhh. It’s so nice to look out the window and finally see winter. Not only that – but we woke up to a phone call telling Greg that he wasn’t required to be at work until 10 am. (I didn’t even ask, but I bet it’s because of the snow – they needed to plow the roads!) That meant that we finally had some free time during daylight hours for my (patient, loving, long-suffering…love you, honey!) husband to play photographer. You see, I needed some better photos of this: 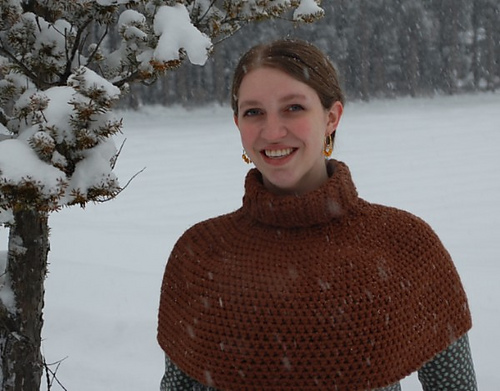 than I could take myself. (Look at that snow! Isn’t it beautiful? It’s still falling, too…it’s got to be at least a foot deep now.) I don’t know if you recall, but I made this cape last winter – I even got the pattern resized and tested before everything fell on top of me! It was just waiting for some better photos. 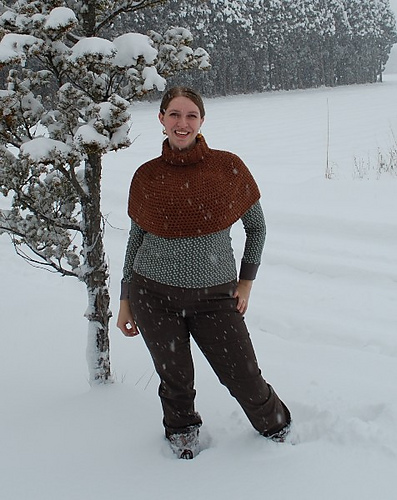 These definitely fit the bill. Thanks, honey! You know, I wasn’t even cold (except for my nose, and well – that happens) because the Cinnamon Cape is so nice and thick and warm and smooshy. 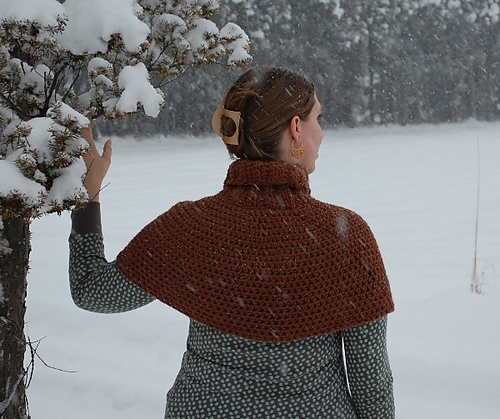 So yes! The pattern for the Cinnamon Cape is now available to purchase, in multiple sizes, either on Ravelry or directly from my website. It’s fast, easy, warm, and awesome! You know you want one.

I’d also just like to point out that today is January 13th, and I have already published three patterns this month. While yes, technically all three were patterns where the bulk of the work had been done previously, three patterns is all I managed to publish in the entire second half of 2009, and so I’m feeling pretty pleased with myself.