I’ve been feeling pretty under the weather lately (ironic, since the weather lately has been gorgeous). Things are looking up this morning, though (ironic again, since today is the first day in recent weeks to be gray and rainy), and I thought I’d fire off a blog post. I haven’t had much interest in crocheting – the whole sick thing, you know – but I read a few books and, as always, the kids kept me busy. Max’s love of all things aquatic continues unabated. We’re going on four months here, which is easily the longest he’s obsessed over anything besides the perennial favorite, cars and motorcycles. In recognition of that, I’ve started making things for him…we’ve started building a reef on his bedroom wall, for instance.

Reef construction: Day 1! I don’t know if you’ve ever tried to draw, or render, or create a coral reef, but it’s pretty complex. A lot of different shapes and creatures, a lot of different colors and details. This is what we managed the second day.

The cool thing is that we’re basing these off of real coral, so Max is learning to identify the differentÂ  species as we put them up. (The big red one is a seafan, for instance, and the large orange hard coral is called Elkhorn. There are also rocks. It’s educational.) Max says our reef is big enough for fish to live in now, so we may start adding more animals next. Although technically coral are animals. Whatever.

Despite everything, I actually started a crochet project the other day. I ran across Max’s baby blanket in a closet and realized that I had never photographed it for blogging or Ravelry, so I thought I would: 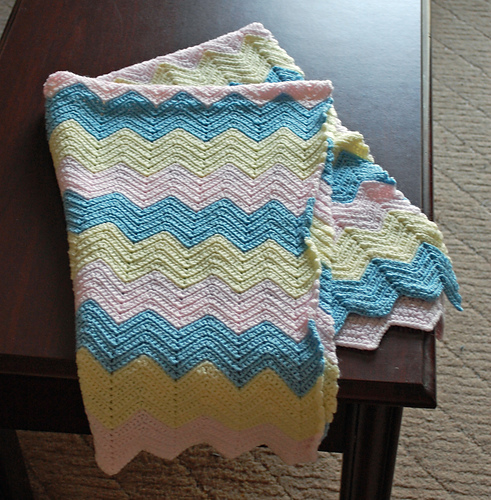 Aww. Five years ago, this was the most ambitious project I had ever attempted. Despite my inexperience, it turned out well. Anyway. I pulled out the pattern to enter it into my projects and, prompted by the I-haven’t-crocheted-in-weeks shakes, I decided to make the project on the cover. 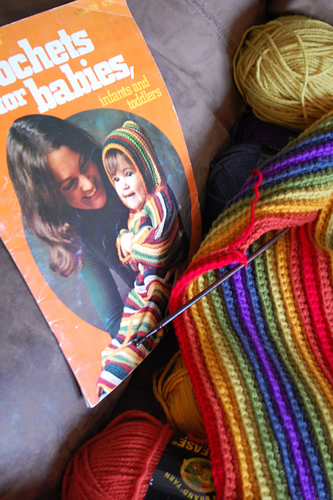 It’s a striped baby bunting that I always thought was cute, from an old, old pamphlet – one I, ah, ‘acquired’ on the way out of my parents’ house. (Mom, if you want it, I’ll mail it back, I swear.) Greg says it looks like an old blanket. Isn’t he sweet?I’ve never had seven colors of the same yarn before, to make it, but I had a lot of leftovers from the boys’ striped hats and I thought I’d give it a go. It turned out to be spot on gauge with the Wool-Ease and the lovely rosewood hook I got at Christmastime… 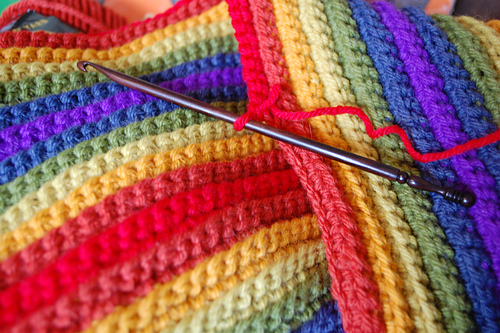 So it’s shaping up to be a simple, cheerful, and very enjoyable project. Aside from the ends. Heaven help me…the ends.