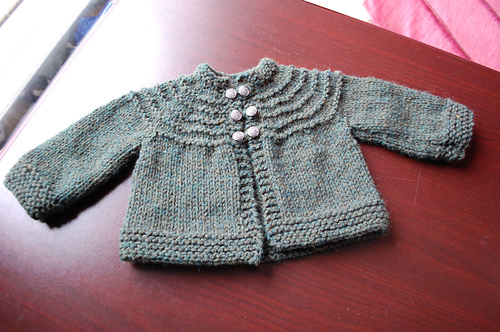 Ta-da! Ridiculously adorable, and absolutely perfect for a little baby boy. I did run into one little snag – it wasn’t until I’d cast off that I realized there were no buttonholes of any sort written into the pattern. Oops. Fortunately, (as I was mulling over the course of action I should take in the fastener department) I got the news that the baby shower had been postponed. The woman who was going to be surprised found out, and requested a different time…and then shortly after word was passed along that she wanted to wait until much closer to her due date so that her mother could come. Fair enough. (I also found out that the reason for the extremely short notice in the beginning was that a friend of hers wanted to help plan it and be here for it, and as she’s moving soon the shower had to be sooner rather than later. Again, fair enough.)

Anyway! I let the little sweater sit in my basket, almost completely finished, for about two days, before I decided to go for it and add some buttons. I made three little figure-eights with the yarn (crochet chains, five chains for each side of the loop), sewed one side of the eight and a button to one side of the sweater, and a button to the other side. They are beautiful, beautiful buttons, too.

Gorgeous. I bought them at the Daiso, 10 buttons for 100 yen. Hah. It was really difficult to get a decent picture of them. It was pretty dim outside…because it started snowing!

It was the year’s first snowfall, and Max noticed it first. “Mommy, what’s happening out the window?” I’ll tell you what was happening. Big, fat, huge white snowflakes were falling down as thick as thieves. The boys were ecstatic. They immediately headed for the door and I had to drag them back for coats, shoes, and mittens. Snow…there’s just something magical about it, and especially for children (who don’t see snow and think about things like shoveling, and icy roads, and frostbite, and the months of cold ahead…) it holds an irresistible fascination. They danced in the snow. They laughed and spun. They tried to catch snowflakes as though they were bubbles. But you know what? You can’t really see the snow very well in that picture, let’s see if the next one shows it more clearly…

EEK! That’s only four hours after the snow started. I honestly didn’t think it would stick. I mean, I was walking around in short sleeves yesterday. Last night it rained, and everything was wet – but I guess 9 hours of snowfall (yes, NINE hours, it is still snowing and it has not stopped since it began this morning) will have its way.

This is a picture I took seven hours after the snow started. Thanksgiving may still be a week away, but with snow this deep, I think Max said it best: “Mommy, it’s time for CHRISTMAS!”