Well, with the preview page up and the Macaw pattern finished, I had a sudden urge to just relax with my yarn for a little while. (Sometimes I feel like I spend more time running my websites about crocheting than actually crocheting.) The result? A lot of fun and, surprisingly, a lot of productivity. I got into this because I love it, after all, and of the things I’ve done, my favorites are the ones I’ve loved doing. So let’s work backwards, shall we? I’ll show you what I’ve been doing. 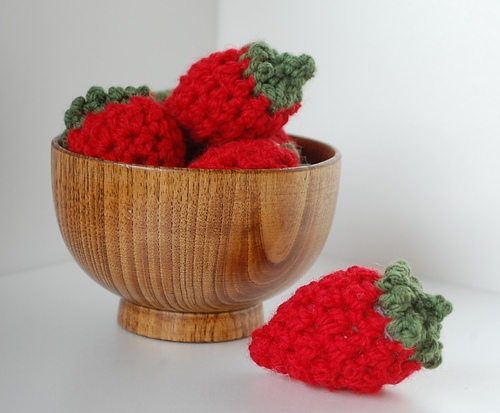 Sunday night I made some strawberries. I actually started – and finished – them one night after the boys had gone to bed. I was woken the next morning by Max saying, “Look, Mommy, strawberries!” He had put all of them in a little plastic bucket he usually uses to tote around Hot Wheels and carried them from room to room, occasionally opening it to take one out and grin at it. Now, a few days later, they’re still sharing bucket space with Hot Wheels – an indication of their favored status. If you like strawberries, you can swing over to Inner Child Crochet and download the pattern. It’s free!

Friday night Greg needed to stay up to make some stateside phone calls. I had already tied up my loose ends for the day and was feeling bored when I remembered a ridiculously lovely hat pattern I’d seen on Ravelry and wanted to make. (If you can’t access the Ravelry link, don’t be fooled: it’s much prettier than the image on the pattern page would suggest.) Anyway, I decided to make one, grabbed some yarn, and two hours later – seriously, two hours – I had a new hat. Taking a picture of your own head is a special challenge. I modified the pattern based on notes others had made that it was way, way too large when worked as directed. Perhaps the designer has chronically tight gauge, or used a yarn thinner than she had thought? Who knows. I eliminated one set of increases (working straight after Round 9), worked until it was almost long enough, and then worked the band until the hat was the length I wanted. Even with fewer increases, this hat is quite roomy. I can’t imagine anyone needing to size it up. But it’s pretty! And it was fast! It was fun working with post stitches again, too. I haven’t done that for a while.

In other news, I bought a head mannequin.

Nothing fancy, just styrofoam, but they had it at the hundred yen store for 600 yen and I said to myself, ‘I could use something like that!’ She’s already proven useful, look – here she is modeling the results of my experiments with that bumpy brown and red acrylic I bought. That helps us get around that pesky self photography issue, eh? I can’t say I’m thrilled with the results of my experimentation, although I did wing it and I made the hat flat on two needles (I haven’t done that before). Still, actually working with the yarn was fun. I had wanted to crochet it, but I found that even my trusty N hook – the largest in my arsenal – was unable to cope with the thick raccoon-tail sections that connected the thin parts. The texture made it fun to use, but the results are less than stellar. Meh. (By the way, I have since purchased a Q hook. Clearly I needed one…)

I’m having a fun week, though, and I can’t wait to see what pops up next!